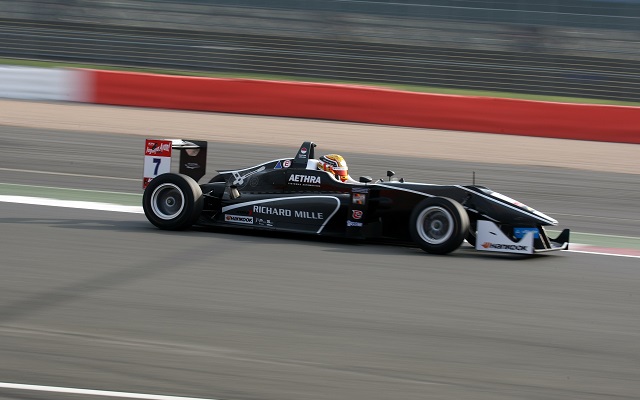 Charles Leclerc held off race-long pressure from Antonio Giovinazzi to end his debut weekend in the FIA F3 European Championship at Silverstone with victory.

The Monegasque driver started from pole for the second race in a row and this time held the lead into the first corner after covering off Giovinazzi.

The safety car was needed on lap one when seventh-placed starter Lance Stroll spun his car on the exit of Luffield.

Leclerc got a decent restart but couldn’t pull away from Giovinazzi. Just past the halfway stage, the Italian came alongside down the Wellington Straight, but Leclerc held the inside line and kept the lead.

There was another safety car late in the race when Pietro Fittipaldi looped his car around at Village, but Leclerc held on over the final two laps to record the win.

Giovinazzi finished on the podium for the third time this weekend, and leads the championship at the end of the opening weekend.

Gustavo Menezes was third for the majority of the race after a superb start from eighth on the grid, but he lost the place to Jake Dennis on the very last lap.

Race two winner George Russell lost ground after starting third but managed to find a way back past Alex Albon at the last restart to finish up fifth.

Markus Pommer was seventh ahead of Brandon Maisano, Callum Ilott and Mikkel Jensen.

Race one Felix Rosenqvist started 35th and last for the second race in a row following his exclusion from the pole positions earned in qualifying two, but couldn’t quite make it into the points this time, instead having to settle for for 12th.