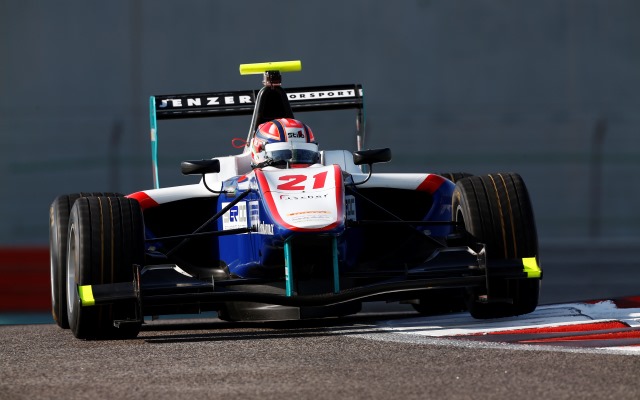 Kevin Ceccon topped the times in the opening session of GP3 post-season testing in Abu Dhabi, ahead of UAE racer Ed Jones and debutant George Russell.

Experienced campaigner Ceccon set a time of 1m55.501s in the Jenzer car that he will hand over to Matheo Tuscher for the afternoon running.

Six tenths off the pace in the second was Dubai-based Jones, driving for the same Carlin team he competed for in European F3 this year.

16-year-old Russell, testing for Arden as a prize for winning the BRDC F4 title, was the quickest newcomer in third.

Formula Renault 2.0 graduate Andrea Pizzitola was fourth for ART Grand Prix ahead of Trident’s Luca Ghiotto and series regular Patrick Kujala, who has switched to Arden for testing.

GT racer Christopher Mies was within a second of the pace in seventh on his single-seater debut with Hilmer Motorsport. ADAC Formel Masters graduate Ralph Boschung was eighth for Jenzer, with the top ten completed by Arden’s Mitch Gilbert and Status tester Matt Parry.

Fuoco, Pizzitola and Parry among GP3 testers in Abu Dhabi

Vandoorne on top in opening session of GP2 test