Campos set for GP2 return with purchase of old team 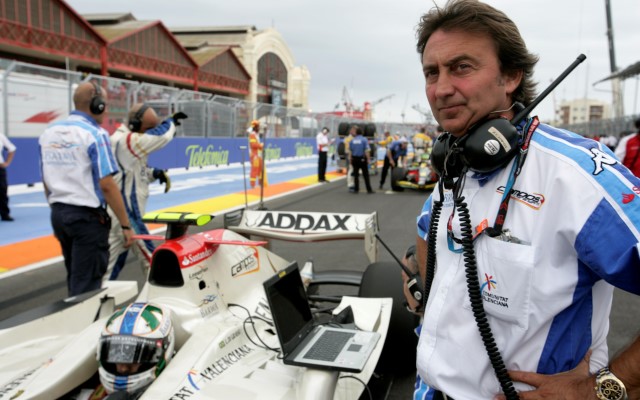 Adrian Campos will return to GP2 next year by re-purchasing the Addax team, according to a Spanish media report.

According to ‘El Confidencial’, Campos is buying back the team that he sold to Alejandro Agag at the end of 2008.

Spanish businessman Agag had been rumoured to be looking to sell the Addax squad as he concentrates on his role as CEO of the new Formula E electric racing series.

Under the Campos name, the team finished third in the GP2 drivers’ standings in 2007 and 2008 with Giorgio Pantano and Lucas di Grassi respectively, also winning the teams’ title in the final year before being rebranded to Addax.

After selling the GP2 concern, Campos went up to establish the Formula 1 team that became HRT, while the Campos Racing name has since been present in the F3 Open, Auto GP and the World Touring Car Championship. An early mentor of Fernando Alonso, Campos currently looks after the career of GP3 points leader Facu Regalia, who is likely to step up to GP2 next year.

Under Agag’s ownership, Addax took Vitaly Petrov and Sergio Perez to second place in the GP2 standings in 2009 and 2010 respectively, before winning the teams’ crown in 2011 with Charles Pic and Giedo van der Garde. However, they slipped back to eighth last season and sit 12th of the 13 teams with one round remaining of the current campaign.

If the Campos name does indeed return to GP2 next year, it will be good news for the series. In healthier times – just a couple of years ago – Addax were a force to be reckoned with. But their preference for drivers with larger budgets appears to have cost them in the last couple of years.

While Agag knows his racing, he is first and foremost a businessman. Campos is an ex-racer who will be coming back to win – not quite at any cost but he will certainly prioritise on-track success over turning a healthy profit.

He will however need to have a strong financial platform. Some of his old rivals from his first stint in GP2 (iSport, Super Nova, Coloni) have dropped out in the last couple of years as the economic climate has taken its toll, and a feature of the new teams (Russian Time, Lazarus, MP, Hilmer) is that they have all arrived with strong backers. As the number of good drivers with full budgets has decreased, these outfits have been able to afford to take on drivers without plentiful funding. Campos is unlikely to have returned without such resources of his own.

It will also be interesting to see whether Campos places his steed Regalia with his own team. Financial considerations could come into account here too, should Campos be able to offer a cheaper deal for his own driver than another is prepared to do.

Rowland beats Celis to pole for NEC finale at Zandvoort