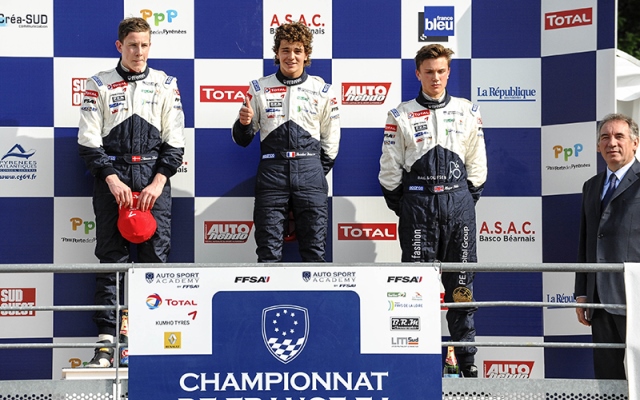 Dorian Boccolacci converted pole to victory in the first French F4 race of the Pau weekend.

The race was red-flagged after Joseph Mawson hit Paul Hokfelt at the hairpin and blocked the track. In addition to Hokfelt, Bryan Elpitiya and Gjergj Haxhiu were unable to take the restart.

Boccolacci kept Lasse Sorensen at bay throughout the race that followed, winning by 0.379 seconds.

“It is important to get pole in Pau because it is very hard to overtake,” said Lotus F1 junior Boccolacci. “My first start went well and the second. Lasse Sorensen ended up very quickly behind me. We began to distance the rest of the field, he did not drop back during the entire race. It was pretty hard to not make any mistakes but it went well. I’m very happy to have won this first race.”

Felix Hirsiger was eight seconds behind in third place, keeping David Droux at bay to complete the podium. Mawson was close behind in fifth, but the double race winner at Le Mans was later excluded for the incident.

Munro charges to victory in FMCS opener at Zhuhai