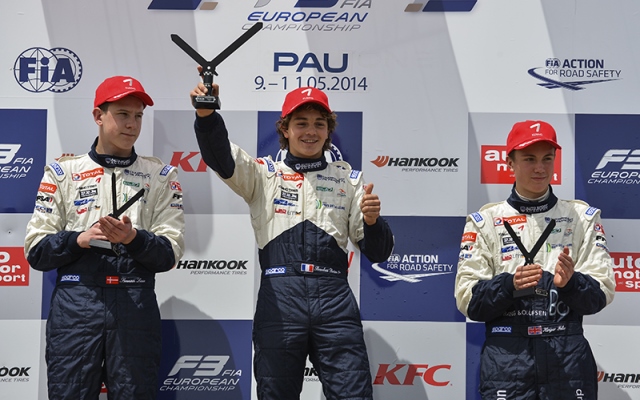 French Lotus junior Dorian Boccolacci took his second victory of the weekend in the third and final French F4 race at Pau.

Boccolacci kept his lead after the start and controlled the whole race, which was interrupted by another red flag and a later safety car period.

In lap two, Valentin Hasse-Clot and Paul Hokfelt Jr collided, causing the retirement of them and also race-winners Joseph Mawson and Denis Bulatov.

The safety car period was triggered by Hugo Sugnot-Darniche, who suffered a big shunt in the middle of the race.

Unable to pass Boccolacci, Lasse Sorensen, younger brother of Formula Renault 3.5 racer Marco, had to settle with second, while the podium was completed by Felix Hirsiger.

There was a close finish below the top six with Finnish Niclas Nylund, Swedish Reuben Kressner, Portuguese Joao Carvalho and Swiss Gjergj Haxhiu rounding the top ten out.