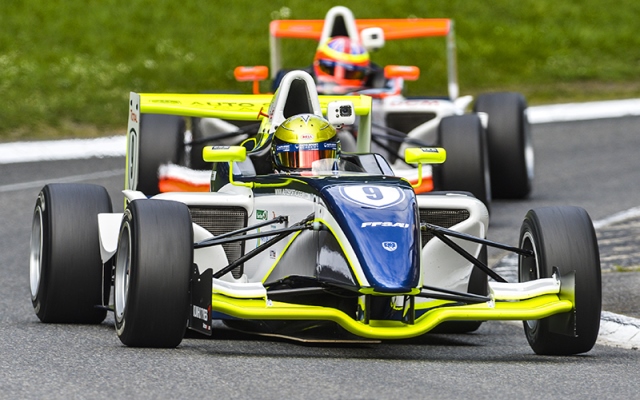 Dorian Boccolacci scored a double pole position for the French F4 Championship round in Pau.

Heading onto the fabled street circuit after fellow Frenchman and Lotus F1 Junior Team stable-mate Esteban Ocon had claimed pole position in F3, Boccolacci came out on top of a battle with Lasse Sorensen, Paul Hokfelt and Felix Hirsiger.

Hirsiger, who has the benefit of having raced in the series in Pau in last year, led the early running before Hokfelt took over. A red flag interrupted proceedings whenGjergj Haxhiu crashed, after which Sorensen hit the top.

Boccolacci then claimed first place towards the end, holding on until the red flags came out in the final minute for a crash involvingNiclas Nylund.

That gave Boccolacci pole for race three of the weekend, 0.042 seconds ahead of Sorensen with Hokfelt third and Hirsiger fourth.

For the race one grid, based upon the drivers’ second best times, Boccolacci will again start from pole ahead of Sorensen and Hirsiger.

David Droux was close to the pole fight with the fifth best time, only 0.32s off the pace. Sixth was Valentin Hasse-Clot, nearly 0.7s away from pole, with Valentin Moineault seventh and double Le Mans winner and championship leader Joseph Mawson only eighth. The Australian had his track time cut short in the earlier practice session by an off.

Behind the top three in race one will be Hokfelt, Droux, Mawson, Moineault, Amaury Richard, Hasse-Clot and Elpitiya.

Gunther leads the way in free practice at Zandvoort