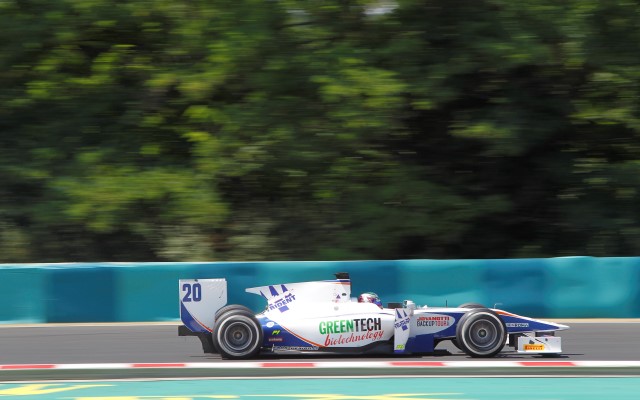 Nathanael Berthon drove away to a first GP2 Series win in the sprint race in Hungary.

Leading from pole, the Frenchman kept up a quicker pace than those behind him for much of the race, which raised doubts about whether his tyres would survive the distance. His speed only came down slightly in the closing laps though, allowing him to take a 2.2 second victory and the Trident team’s first win since the very same race two years ago.

Mitch Evans held second place throughout after starting alongside Berthon on the front row. He was urged by his engineer to keep life in his tyres, which he had also used at the end of Saturday’s race, but even when Berthon slowed towards the end, he was unable to make significant inroads.

Fabio Leimer got up into third at the start but then fell back from the leading pair, finishing 11 seconds behind Evans. Marcus Ericsson also started well and pressured Leimer early on before settling into fourth.

Felipe Nasr got up into fifth place past Simon Trummer on lap three but he too then seemed to back off as a train of cars formed behind him. Nasr did preserve enough life in his tyres to put a gap between himself and those behind before the end, but he wasn’t close to Ericsson.

James Calado also passed Trummer to take sixth place. Starting ninth, he got a superb launch off the line only to be cautious around turn one, before getting past Stephane Richelmi and Trummer. Trummer finished in seventh, with Sam Bird in eighth.

Championship leader Stefano Coletti failed to score again, having to pit for a front wing change before retiring a lap from home. Nasr is now only six points behind.