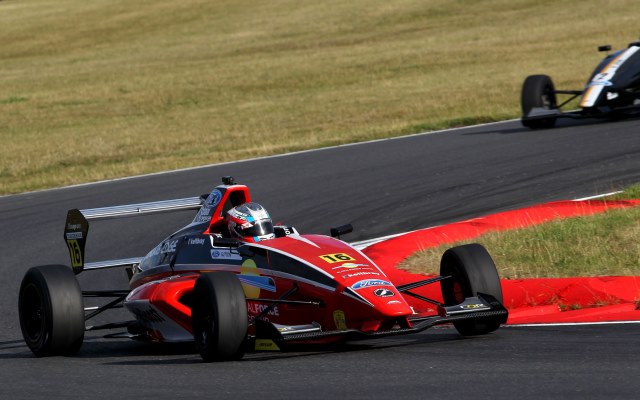 Ashley Sutton scored his second win of the Formula Ford GB weekend at Snetterton with a lights-to-flag victory in the third and final race.

Sutton started from pole position and kept the lead at the start. He built up a lead of over two seconds on second-placed Jayde Kruger in the opening four laps, and finished up 2.8 seconds clear.

Kruger came home over ten seconds ahead of JTR team-mate Max Marshall, who got in front of Kruger’s title rival Harrison Scott on the first lap and was able to edge clear of the Falcon man. Scott ends the weekend with a 14-point lead over Kruger.

Ricky Collard and series newcomer Michael O’Brien scrapped over fifth. O’Brien got ahead on lap two, only for Collard to regain the place two laps later. Collard struggled to stay inside the track limits though, first being handed a five-second time penalty and then a drive-through which relegated him to ninth.

Juan Rosso was sixth ahead of Louise Richardson and Chris Mealin, with Greg Holloway completing the ten finishers behind Collard.

James Abbott retired on lap two with a misfire.