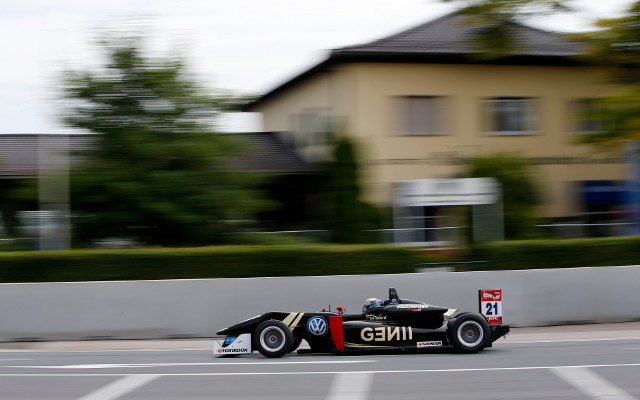 After earlier missing out on race one pole to Charles Leclerc by just nine thousandths of a second, the Lotus F1 junior this time finished up nearly two tenths clear of the championship leader.

As was the case in the first session, the second of the two groups was the quicker one. Leclerc and Antonio Giovinazzi took turns at the top early on but Albon made first place his own around half way through the 20 minutes of running.

The order of Albon-Leclerc-Giovinazzi held firm until the end of the session, and Albon also remained on top of the second-fastest classification.

Giovinazzi got within 0.003s of his own time late on, putting him second on second-quickest times (and therefore onto row two for race three) ahead of Leclerc.

Albon will be starting from the front row of the grid for the first time, and will be joined there in both races two and three by the first group’s pace-setter George Russell, whose one previous front row start yielded his maiden F3 win at Silverstone.

The British pair then went back to the top at the very end, Russell edging out Dennis by 0.019 seconds.

Gustavo Menezes was fourth fastest in the group and will start eighth for race two but drops behind Brandon Maisano and race one front-row man Maximilian Gunther on second-best times.

Santino Ferrucci was fourth in the second group and will start seventh for races two and three. Mikkel Jensen will be ninth in race two, but swap places for race three with 11th-placed Felix Rosenqvist.