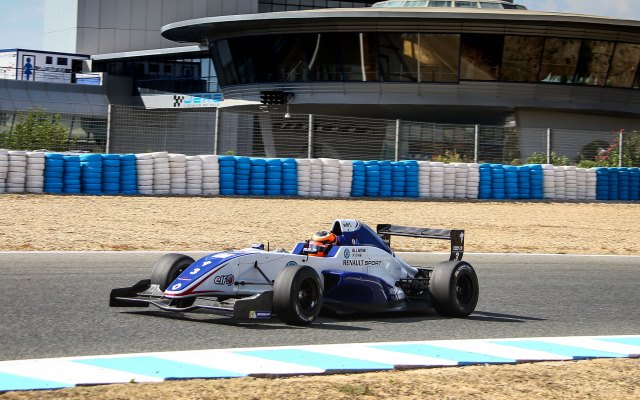 Jack Aitken claimed the 2015 Formula Renault 2.0 Alps title in the final race at Jerez, finishing third from 10th on the grid and claiming maximum points as Ben Barnicoat inherited the outright win.

As the first finisher of the Alps regulars behind three wildcard entrants, Aitken overturned the five-point deficit he had to rival, compatriot and team-mate Jake Hughes, for whom a drive from 19th to ninth and third among the scorers was not enough.

The British Koiranen duo had ended up down the order on the grid after a red flags interrupted qualifying and prevented them from lodging a competitive time.

Aitken gained a couple of places on the first lap to finish it eighth, though still third among the Alps scorers with Matevos Isaakyan and Thiago Vivacqua up the road.

Hughes made better progress in the opening laps to climb to 14th overall and fifth among the scorers.

That would have put him equal on points with Aitken, who would then have been champion on countback.

Aitken ultimately controlled his own destiny though, and he moved up past Vivacqua and into sixth overall.

Hughes continued to move forward and past James Allen for 11th overall and fourth among the scorers, but Aitken was soon on course for 25 points when Isaakyan fell out of fourth and down to 10th.

Hughes was eventually able to get to ninth past the SMP Racing-backed trio of Isaakyan, Alexey Korneev and Nikita Troitskiy, but not even beating fifth-placed Vivacqua to the 18 points would have been enough to stop Aitken.

Up front, Croatian racer Martin Kodric led Fortec team-mate Barnicoat from pole position until chequered flag for what would have been his maiden car racing victory.

However, a 10-second penalty for Kodric relegated him to fourth and gave victory to Barnicoat ahead of Anthoine Hubert and Aitken.

All three return to Jerez next weekend for the deciding Eurocup round with a chance of winning the title, 29, 15 and seven points respectively adrift of joint leaders Louis Deletraz and Kevin Jorg, who have not had the benefit of racing at Jerez this weekend.

Max Defourny was fifth ahead of Vivacqua, Simon Gachet and Jehan Daruvala.

Kodric gets pole for Alps finale, Aitken ahead of Hughes