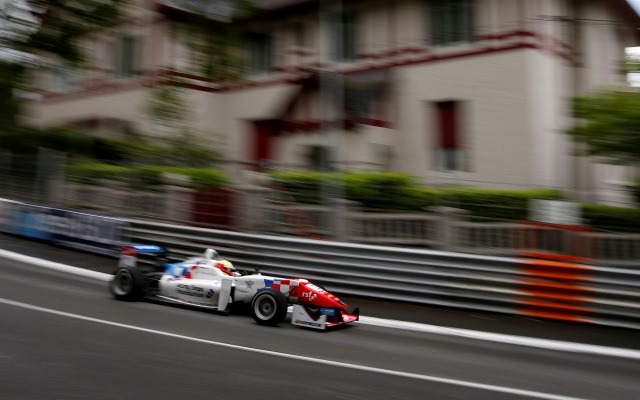 Jake Dennis led from start to finish to record his maiden FIA F3 European Championship win in race one on the streets of Pau.

Starting from the first of three pole positions he claimed in qualifying on Friday, Dennis kept the lead off the start while Antonio Giovinazzi got a good launch from fourth to take second away from Charles Leclerc.

The front three ran nose-to-tail throughout the race, which saw two back-to-back safety car periods, but Dennis was never really forced into defensive driving and took the chequered flag with a 0.680-second advantage.

Giovinazzi’s P2 keeps him in the championship ahead of Leclerc, who was half a second further back as the rookie took his sixth straight podium finish.

The top three pulled away from the rest in the first part of the race and then again after the safety cars, with Maximilian Gunther finished seven seconds behind the winner as he finished fourth for the third time in four races.

After passing Callum Ilott on lap one, Alex Albon spent the race on Gunther’s tail but had to settle for fifth.

There was contact at the hairpin on the second restart between Ilott and Alessio Lorandi – who were rivals in karting last year. While Ilott eventually fell to 11th, Lorandi took sixth while Mikkel Jensen survived race-long pressure from George Russell to finish seventh.

Prema team-mates Lance Stroll and Brandon Maisano completed the top ten. Maisano had cleared Stroll and Arjun Maini on the first lap but lost out to the Canadian in the one lap of racing inbetween the two safety cars.

The fourth Prema driver Felix Rosenqvist finished where he started in 13th, but only after re-passing Gustavo Menezes.

The safety car periods were triggered by incidents requiring the removal of Dorian Boccolacci and Michele Beretta‘s cars respectively.

11th-placed qualifier Pietro Fittipaldi was ruled out of the race by a hand injury sustained in the second qualifying session last evening, which had already made him a non-qualifier for races two and three.