written by Aditya Banerjee 1 May 2015

The inaugural season of the Italian F4 championship was a case of breaking new ground – it saw the FIA making a foray into Formula 4. The series managed to step into the niche vacated by the now defunct Formula Abarth quite seamlessly, becoming a reliable entry-level option for youngsters from Italy and elsewhere.

The 2014 edition was won by Ferrari junior Lance Stroll, who moved up to European F3 in 2015, as did Brandon Maisano and Mahaveer Raghunathan, while Leonardo Pulcini graduated to the Euroformula Open.

With 26 drivers confirmed for 2015, the series will be looking to maintain its momentum from the previous year, although the?commencement of other Formula 4 championships means that it no?longer holds a monopoly at this level. Paddockscout previews the class of 2015. 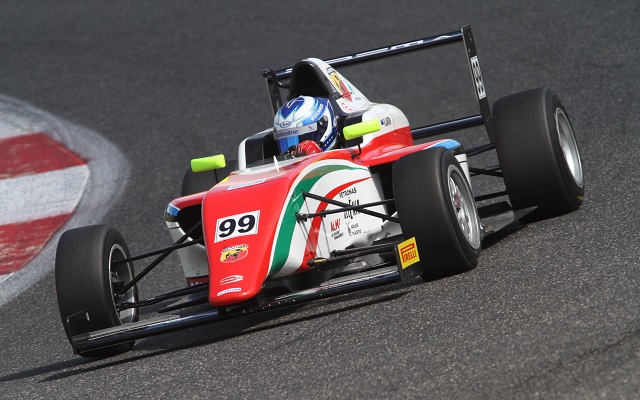 One of the most successful Italian teams in junior single-seaters, Prema was strong right off the bat in F4 in 2014. A cessation of their participation in Formula Renault 2.0 should help them in focusing on their F3 and F4 programmes. Their 2015 lineup consists of two impressive karting graduates and an acquisition from Formula Renault 1.6.

Ferrari continue to repay their faith in Prema and their newest Driver Academy member Guanyu Zhou will drive for the defending champions in 2015. The 15-year-old from China has a very good karting record, having won British and European Rotax Max Junior series in 2013, before finishing runner-up in the Senior Class last year. Zhou also raced in the Italian F4 Adria Winter Trophy, finishing on the podium in both races.

Estonian racer Ralf Aron moves across to Italian F4 in 2015 after a strong double campaign in?the Nordic and North European categories of FR1.6, on both occasions coming on strong in the latter half of the year to finish sixth in a part-campaign in the former, and runner-up in the latter. He also managed to win the Adria Winter Trophy.

Completing the lineup is Giuliano Raucci. The Brazilian finished sixth in the 2013 CIK-FIA World Championship in the KFJ class, which also featured the likes of Enaam Ahmed and Lando Norris. Raucci is also participating in the Brazilian F3 championship this year, taking a pair of top-six finishes in the first round. 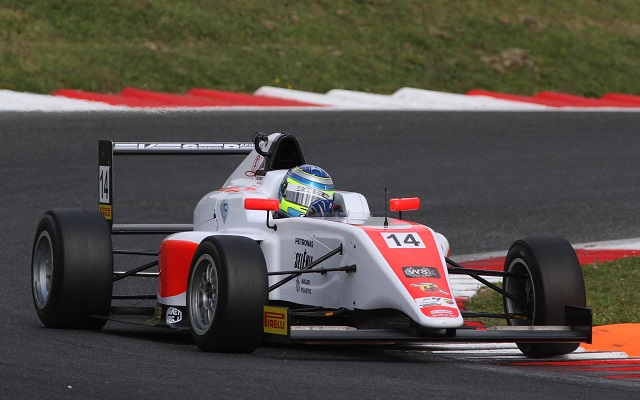 Formerly Euronova Racing, the team were ‘best of the rest’ behind Prema in last year’s championship. The outfit, led by the former F1 driver of the same name, have expanded to three entrants for 2015.

Venezuelan Mauricio Baiz, 15, had a strong 2014 in KFJ karting, finishing third in the CIK-FIA World Championship and fourth in the WSK Super Masters. He will be joined by Japanese racer Marino Sato, who also steps up from karting, having taken second in the Asia-Pacific KF3 championship in 2012.

The third car is registered to be entered under the ‘Israel F4’ banner. They were supported by TS Corse last year, with Israeli?driver Bar Baruch?who finished 15th overall last year with a best finish of fifth?retained for a sophomore season.

The Swiss squad finished fourth in the inaugural season last year, and will?again be fielding a four-car lineup. With three of their 2014 drivers sticking around for a sophomore season, they will be hoping for a better showing this time around.

Swiss-Brazilian driver Lucas Mauron?returns for a second season in the series. Mauron finished tenth in the standings in his debut season, taking a championship class third place at the penultimate race at Imola.?Compatriot Nico Rindlisbacher?had a tougher year, ending up 21st overall, with a best finish of ninth.

Bahraini Ali Al Khalifa participated in the Trophy Class in 2014 season, taking an overall best finish of 11th over the course of the year. The lineup is completed by newcomer Marcos Siebert. The Argentine has previously driven for Jenzer in the Formula Renault Eurocup in 2013 when he finished 24th in the standings. 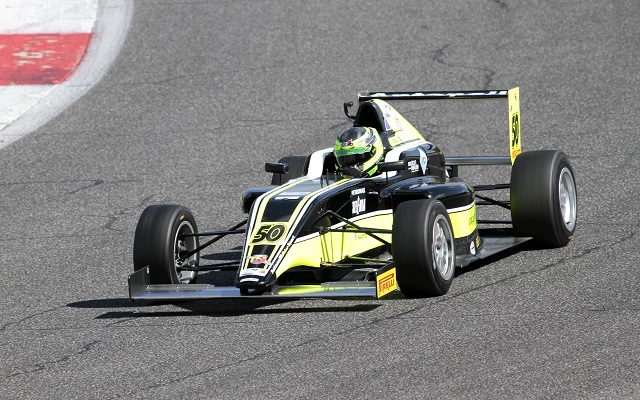 The Italian squad?lost out in the teams’ standings to Jenzer on a countback in 2014, having had only one full-time runner over the duration of the season.

That driver is Joao Vieira, back after finishing seventh in the standings last year. The Brazilian took only one overall podium over the season, but the pace was definitely there, as was evidenced by his fastest laps in the final two races of the season.

2014 part-campaigner Matteo Desideri returns to the squad for 2015. The Italian missed the first three rounds of the season but was able to finish 11th overall, losing out on a top ten finish in the last race. He managed to secure a pair of third-place finishes at Magione and Imola.

Joining the team are two karting graduates?Italian Mattia Ferrari and Romanian Kikko Galbiati. The former was 23rd in the Andrea Margutti Trophy last year, while the latter has raced in the Sodi World Series and the Campionato FunKart. 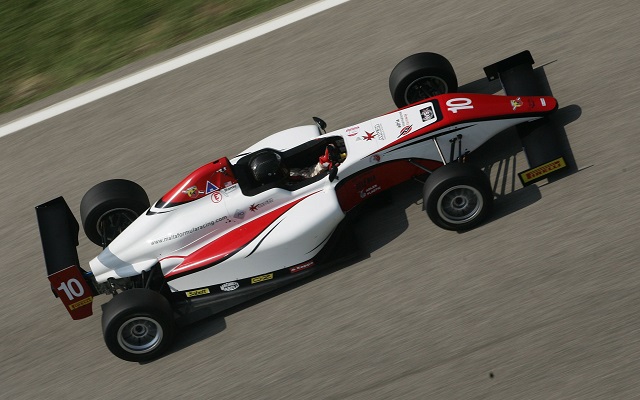 The team from the Mediterranean island nation by the same name were table-proppers in last year’s championship, but did also look after the cars of F&M for much of the season, taking Mattia Drudi to the runner-up position. Malta will field three karting graduates for the 2015 season.

15-year-old Mexican Raul Guzman joins the team after winning the SKUSA Supernationals chanpionship in the S5 category, beating French F4 race winner Pato O’Ward among others.?Joining him in the team is Kevin Kanayet, a Colombian driver of Croat descent, who was set to race in Spanish F4 in 2015 before the cancellation 2014 season.

Russian Yan Leon Shlom was the last driver to be announced by the team. The 15-year-old finished third in the Trofoe delle Industrie KF last year, and is combining?his Italian F4 commitments?with an ADAC F4 campaign where he is driving for two-time DTM champion Timo Scheider’s eponymous team.

German powerhouse Mucke?have years of experience in junior formulae, but this will be their debut season in the Italian single-seater scene. The team will field three drivers with impressive karting resumes?in 2015, with all of them?racing with Mucke?in ADAC F4 as well. The two calendars have no clashes except for their respective championship finales.

Russian Robert Shwartzman was an early pacesetter in Italian F4 pre-season testing last year, but due to age restrictions (he was 14 at the time) he was only able to make his single-seater debut at the penultimate round at Monza. Once in the car he was able to acquit himself well, taking points on four occasions with a best finish of fifth. Prior to?that, Shwartzman had finished third in the KFJ class of the CIK-FIA World Championship in 2013.

Alongside him?will be?David Beckmann. The German, who turned 15 on Monday, has a?stellar?karting record. After conquering KF3 with two titles in 2012, he claimed?third in the KFJ class of the WSK Euro Series in 2013, and beat Mick Schumacher to the Junior German karting championship title last year.

Completing the trio is Austrian Thomas Preining. The 16-year-old won the SKUSA Supernationals Rotax Junior in 2013, and followed that up with the Rotax Euro Challenge Junior title last year. He’s already off to a fine start in ADAC F4, taking a podium in the the final race of the first weekend at Oschersleben.

Swiss?team RB Racing have three entrants for their debut season. Polish twins Wiktoria and Julia Pankiewicz will be the first female drivers to race in the Italian F4 championship. Both are 15-year-old karting graduates. Wiktoria finished 16th in the CIK-FIA Academy Trophy in 2013 and participated in the European Championship KF class last year, while Julia raced in the KFJ class in the same series.

The pair will be joined by Diego Bertonelli. The Italian won the CSAI Supercorso last year. Prior to this, he had finished eighth in the WSK Final Cup in 2013.

Torino Squadra Corse will be fielding a standalone entrant this season after entering under the ‘Israel F4’ moniker?last year. The team’s sole driver will be 15-year-old Australian Alex Peroni, who moves up to cars after a karting career that consists of several wins in his native Tasmania and a participation in the WSK Final Cup in 2013.

Another new squad in the series, Team Costarica will field one entrant?Ecuadorian driver Fernando Madera, who finished third in the Formula Abarth championship in 2014, taking nine podiums in 14 races.

The last team to be announced was?Teramo?Racing, who?are yet another new team in the championship. They will field Riccardo Ponzio, who moves to single-seaters after driving in the Peugeot RCZ Cup in the Italian Touring Endurance Championship last year.